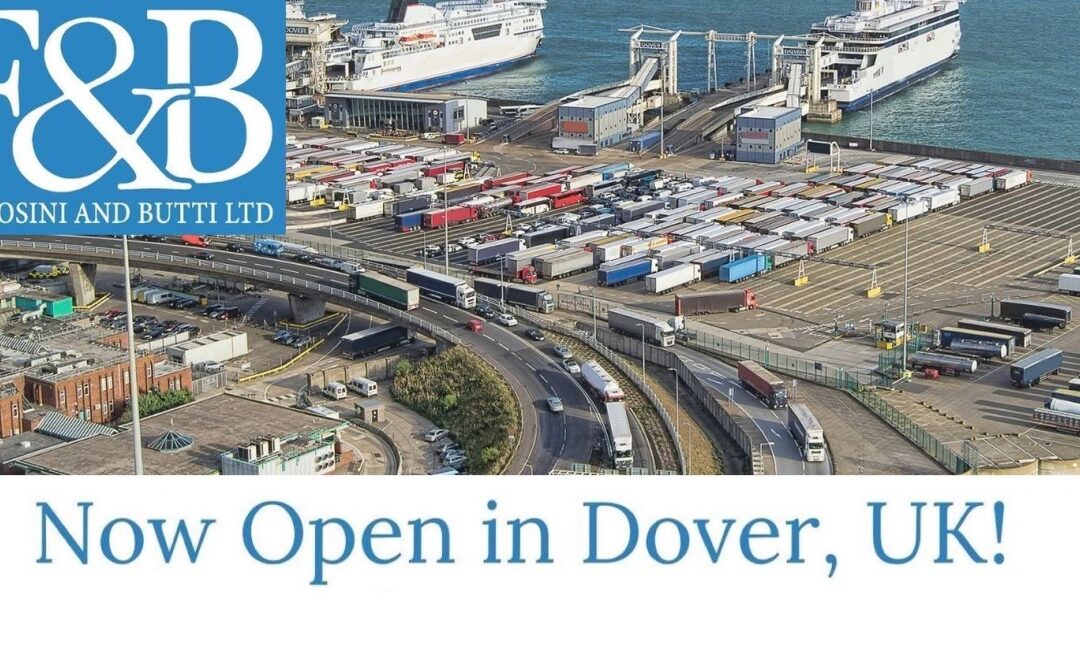 A Story of Resilience

Both family companies, operating since 1929 (Franzosini) and 1968 (Butti), the arrival of Brexit and UK customs clearance struggles was a ripe opportunity for the companies’ directors to be of service. As if a global pandemic wasn’t enough of a hurdle, at the end of 2020, the partners came face to face with the unfortunate consequences of Brexit highlighted by global headlines: Confusion at the customs border, as a miles-long line of truck traffic piled up in Southern England. The eventual solution to the problem was inspired by Switzerland.

“The UK customs took an example from the Swiss customs procedures. I thought, we can help here. However, this idea could only be developed with the help of another customs expert and friend like Alessandro Butti. Together was a winning choice: Better together,” commented Marco Tepoorten, owner and director of Franzosini Group, a leading Swiss transport, logistics, and customs clearance company.

Tepoorten, who started his journey at Franzosini in 1985 as an apprentice, and is now the company’s owner, is familiar with all facets of his business. Having had an uninterrupted collaboration with Alessandro Butti’s family company since the ‘80s supporting their export operations from Italy, there is a legacy of trust and professionalism.

Alessandro Butti is the director of Butti Dino, a customs clearance operation founded in 1968, by his father, Dino Butti. He started from zero, and grew a business that became the centre of customs clearance in the Como area. Today, the customs management establishment serves expeditions all over the world.

“Brexit has brought a considerable increase in our workload. Since the first of January we had to compete in a new market,” explained Alessandro Butti.

Bringing a fresh perspective to the collaboration is Marco’s son, Christian Tepoorten. He grew up helping out with small chores at the office as a child, and matured to doing heavy work in the warehouse as a young apprentice, learning how the business worked on a practical level. After working in the billing, accounting, and operational departments, he advanced to working in sales.

“The choice to open in the UK was born from Christian,” acknowledged Marco Tepoorten.

Christian revealed how the idea came about:

“About two years ago, I saw an article in the Swiss news about how the UK would leave the EU, and I was surprised.”

He immediately noticed the similarities of how the UK would need to clear customs in the future, just like Switzerland. He brought the article to his father, and pointed out the opportunity to help. However, it was too soon to open an office in the UK, with a possible Brexit years away. The young Tepoorten relocated to the French Riviera, eventually cultivating Franzosini’s Monaco transport and customs clearance office in the Principality of Monaco in August 2020, in the calm months of a global pandemic that was not yet over.

But in Spring 2021, the time had come. The young Tepoorten coaxed his father to reconsider

the UK office. It was clear that Franzosini’s knowledge of solving customs clearance problems in Switzerland, and Butti’s increase in volume of work, could turn the perfect storm of Brexit into smooth sailing for the business’ clients. The plight of the pandemic couldn’t interfere with their drive.

In circumstances that in the past would’ve made opening a new company impossible, Franzosini and Butti perceviered. As headlines continued to highlight struggles at the border, the Tepoortens started taking action. Thanks to modern videoconferencing technology, the family company was able to communicate with the Chamber of Commerce in Kent County, and start the process of registering the company, and securing an office space for the new Customs Clearance branch. All of this, without even stepping foot in the UK.

The hiring process, which would usually involve multiple face to face meetings and interviews, was done digitally. Through the help of a hiring agency, our protagonists were introduced to a fine selection of customs clearance agents with enough experience and expertise to manage the new UK office. Although the Swiss team hasn’t yet had the pleasure of a tea or even a handshake with Evelynne Morris, their virtual meetings have created a strong foundation for the new UK branch.

With over 30 years of experience, Evelynne Morris has deep knowledge of customs matters in many varied industries, from the automotive world to fine art. Her experience includes having been a Dangerous Goods Safety Advisor, as well as helping clients achieve AEO status. She has helped freight forwarders in understanding the new procedures for the movement of traffic to and from the UK, Post Brexit. Evelyn is committed to making a difference in the world of customs not only within the UK and Europe but also internationally.

Instead of breaking down or bowing out during an exceptionally difficult period of time, the team at F&B has instead grown more resilient. The ultimate goal of the UK partnership between Franzosini and Butti is to solve customs borders issues, and iron out the customs process between the EU and UK. Armed with contemporary technology, and empowered by a hard working and fearless attitude, F&B Franzosini and Butti Ltd., is ready to grow.

“I know the potential that we’ll be able to reach thanks to the collaboration with two partners, who I respect a lot.”

The Tepoortens feel the same way.

News, events and curiosities about F&B Franzosini and Butti Ltd. and the logistics sector.

View on Instagram
We use cookies on our website to give you the most relevant experience by remembering your preferences and repeat visits. By clicking “Accept”, you consent to the use of ALL the cookies.
Do not sell my personal information.
Cookie SettingsAccept
Manage consent

This website uses cookies to improve your experience while you navigate through the website. Out of these, the cookies that are categorized as necessary are stored on your browser as they are essential for the working of basic functionalities of the website. We also use third-party cookies that help us analyze and understand how you use this website. These cookies will be stored in your browser only with your consent. You also have the option to opt-out of these cookies. But opting out of some of these cookies may affect your browsing experience.
Necessary Always Enabled
Necessary cookies are absolutely essential for the website to function properly. These cookies ensure basic functionalities and security features of the website, anonymously.
Functional
Functional cookies help to perform certain functionalities like sharing the content of the website on social media platforms, collect feedbacks, and other third-party features.
Performance
Performance cookies are used to understand and analyze the key performance indexes of the website which helps in delivering a better user experience for the visitors.
Analytics
Analytical cookies are used to understand how visitors interact with the website. These cookies help provide information on metrics the number of visitors, bounce rate, traffic source, etc.
Advertisement
Advertisement cookies are used to provide visitors with relevant ads and marketing campaigns. These cookies track visitors across websites and collect information to provide customized ads.
Others
Other uncategorized cookies are those that are being analyzed and have not been classified into a category as yet.
SAVE & ACCEPT